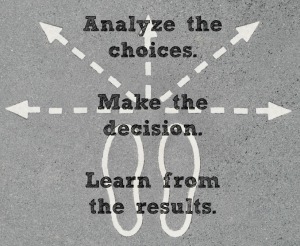 I met with my therapist this morning and it was one of our most positive and productive sessions yet. We discussed the events of the wedding weekend and being on my own for the next few months. I know I said that I gave myself a “B,” but after our discussion I think I actually did a little bit better than that. One of the characteristics (symptoms?) of my depression is that I can be overly critical of myself and skeptical of my own ability to handle various situations, and it helps to have this pointed out occasionally. With regard to the past weekend we talked about my extricating myself from uncomfortable situations is actually quite a normal impulse for people who aren’t drinking when they’re around people who are drinking or are drunk, absent any additional issues they may or may not have with alcoholism. She pointed out that being sober and staying out, which I mentioned as a goal, may not mean I’m having the same experience as everyone else. Take, for example, the fact that my brothers went swimming in the hotel pool without me. It sounds like fun, but the reality is, would I have actually enjoyed it if I had joined them while I was sober? If I were sober would I think getting pantsed in the pool was funny (something that apparently happened)? Would I worry about being in the pool “after hours” or could I laugh it off? Would I think we were being too loud? I’m just using this as an example, but the truth is, those things would either not be funny to me or become sources for anxiety. So I went to bed.

Decision making is about mindfulness, being able to look at the situation, make a choice and live with the consequences. Actually, it’s more important for me right now to learn from the choices I make. Drunk swim at 2:00 AM? I think I can live without that. Sitting around outside on a deck with my siblings and/or cousins chatting and catching up? That’s more my speed these days. There’s another family wedding coming up next week and I’m feeling more confident that based on this past weekend I’ll be in a better position to make choices that are good for me.

As I said, we also discussed being on my own for the next few months. How making smart choices starts off with the environments we put ourselves in. Before they left this morning, my parents removed all the liquor and wine from the house. Now, this doesn’t mean I won’t drink while they’re gone but it creates an environment where now there are additional levels of choices and decisions to make if I want to drink, It’s no longer a question of opening up a cabinet and taking out a bottle, now if I want to drink while they’re gone I have to make the decision to leave the house and go to a bar or a liquor store. Each additional level of decision making is a chance to stop myself, to think about my choices and make the smart ones.

The other way I can put myself in a healthy place while they’re gone is to keep busy. Making sure I’m getting out of the house for dinner with my sister, my nephew’s soccer game or trivia night with my friends. Being alone in a big empty house isn’t good for a depressed mind. So I want to make sure that I’m getting out or having people over. I get it, it seems like these are kind of no-brainers, or at least the kind of thing that should be self-evident, but I sometimes need to think about them this way and to write them down.

As I waved goodbye to my parents this morning the rest of the day could have unfolded and been pretty depressing and potentially even the kind of day that i’d chalk up as a setback. Instead I had a great conversation with my therapist and feel pretty confident heading into these next few weeks.