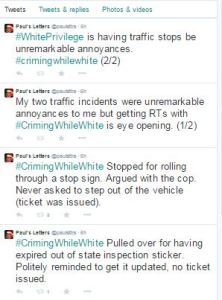 I remember the last time I was pulled over. I was on my way to a business lunch on a moderately busy four lane road in Syracuse, NY. I was wearing a blue pinstripe suit with a white shirt and bow-tie. I saw the Sheriff’s car coming at me from the other direction and as we passed he flipped on his lights, made a u-turn and came up behind me. Had I been speeding? Yes, but not egregiously- doing 51 in a 45, or something like that. What else could it be? I was annoyed. Didn’t this cop have better things to do? I was going to be late for my meeting.

“Good morning, sir. License and registration.” I handed it to him, grunting a greeting.

“Where are you headed?”

“Up the road to [restaurant name] for a meeting.”

“Well, your car’s registered in New York but you’re missing an inspection sticker.”

“I moved back here from Virginia a few months ago- I was told when I registered the car that the Virginia inspection would be OK until it expires.”

“Well, I need you to take care of that as soon as possible.” He handed back my information. “Have a nice day, sir.” And he walked back to his car, and I went on to my meeting.

He wasn’t rude or disrespectful in any way. He was the epitome of professionalism, and I’m not going to jump to conclusions and say that this particular individual would have treated me any differently had I not been a professionally dressed young white man driving around in an uninspected car. For all I know this individual is the best cop in the county, consistently courteous and even-handed in all of his interactions with civilians.

Unfortunately that would make him closer to the exception than the rule.

Now, don’t think I’m trying to impugn the professionalism or commitment to community of police in general. Police are, just like the rest of us, subject to biases and preconceptions that can impact our behavior towards others on a subconscious level. Don’t believe me? Check out the Implicit Association Test online– a tool that can uncover hidden biases on a range of factors, including race, age, gender, etc., even among people who would never describe or think of themselves as bigoted or prejudiced. According to the FAQ section, “the IAT shows biases that are not endorsed and that may even be contradictory to what one consciously believes. So, no, we would not say that such people are prejudiced. It is important to know, however, that implicit biases can predict behavior.”

In the wake of first the Ferguson decision, now the Eric Garner decision and, probably coming at some point relatively soon, a decision in the Tamir Rice case, we need to take a close look at how these biases play out when it comes to policing. My previous blog post asking “What can we do in the aftermath of Ferguson” focused on recognizing and admitting privilege and bias while calling on police departments to adopt things like body cameras to help reinforce the idea that their actions and behavior (and the action and behavior of suspects) will no longer be subject to he said/she said witness testimony. Unfortunately, even with video of the Eric Garner arrest, justice wasn’t served by any reasonable standard. So let me come back to the idea of introspection.

On Twitter you can find a series of posts under the hashtag “#CrimingWhileWhite,” where people are sharing their own interactions and experiences with police, like the one I shared above. What you’ll see is a pattern, for white people who break the law, of getting far more lenient treatment than one might expect, and particularly lenient compared to what goes on in the black community. Warnings, watered down charges and expunged records. I think this can be eye-opening for everyone, to see in anecdotal terms the disparity that exists. As the title of this post suggests, for many people, myself included, interactions with the police are typically “unremarkable annoyances.” I’ve never been asked to step out of the vehicle, I’ve never been frisked and most importantly, I’ve never been afraid of seeing flashing red lights in the rear view mirror. That’s privilege. And it’s not right.

Why isn’t it right? Because unless we point out what happens it’s easy to fall for a false narrative. Rudy Giuliani criticizes the black community for not caring or doing enough about black on black crime. Slate’s Jamelle Bouie had a powerful response refuting Giuliani, showing that his narrative just doesn’t stand up to scrutiny. Another false narrative, or faulty narrative, has to do with New York City Police Commissioner Bill Bratton’s position on “broken windows” policing that says by cracking down on more minor crime you reduce the incentive for major crimes. Maybe there’s some merit in the idea, but New York’s falling crime rate in the 90’s also happened when the crime rate nationally was falling, and, as this analysis from Business Insider suggests, it may have more to do with an increased number of police overall than with the specific crackdowns.

Consider the crimes that Michael Brown and Eric Garner were originally stopped for- jaywalking and selling untaxed cigarettes. I think you’ll agree these are minor crimes. In each case it’s clear that Brown and Garner are frustrated by being stopped- expressing annoyance (and, in the case of Brown it seems, anger that turned physical).  My father asked me, referring to Brown, “Why would anyone ever tell a police officer that [to go fuck themselves- my Dad doesn’t curse]?” When Darren Wilson asked him to move to the sidewalk, was there something in his voice that betrayed a subconscious bias that Michael Brown picked up on? We’ll never know, but it isn’t difficult to imagine it. If I lived in a community where I was being disproportionately targeted for minor offenses, and knowing that the system is more likely to exert a heavier punishment on me than it would to a peer of a different race, I could see getting annoyed and angry and telling a cop to go fuck himself if I was walking down the street and picked up on something in the way he asked. Is it the healthiest or most mature response? No, of course not, and it doesn’t excuse whatever physical altercation occurred, but it’s a very understandable response.

Now think of Eric Garner- before the police grappled him to the ground he asked them to stop harassing them, telling them he just wanted to be left alone. He didn’t curse at them, he didn’t threaten them and he didn’t raise his hands in violence. Look at how many officers swarmed at him. Over selling loose cigarettes?

These are the types of minor crimes that the #Crimingwhilewhite thread has in abundance, but they almost all end with a warning and a tip of the cap, not being wrestled to the ground in a chokehold. Eric Garner left behind several children. Hopefully someday they’ll be privileged enough that interactions with police will be nothing more than unremarkable annoyances I once took for granted, but no longer can.

If you haven’t already, read this very good perspective by Kara Brown on the #Crimingwhilewhite phenomenon at Jezebel, but this bit at the end I think neatly summarizes the argument:

Nobody wants white allies to stop trying and stop fighting, but there are times when it is best to just sit down and listen. The immediate aftermath of the shooting of an unarmed black person by the police or the announcement that their killer will walk free is almost always one of those times.

I want your solace and support and action, but perhaps take a moment and think: I know this is horrible but I still cannot begin to imagine how you’re feeling right now because I am not a black person living in a country that continues to prove that my life is worth less than others.

I respect the opinion and upon reflection I probably didn’t add much to the subject of race and police violence with my own anecdotes. She’s right- we will never feel the pain or the fear as black Americans do. So we need to listen.

But may I offer a role for allies on how we can act that goes beyond hashtag activism? We can go out as apostles to the gentiles, to borrow a biblical reference that inspired this blog. The reality is that many of our white parents, our white co-workers, our white friends and neighbors don’t get it (we see this everyday) and, though I wish it weren’t the case, on their own they might not read Ta-Nehisi Coates, Zerlina Maxwell, Jamelle Bouie or Kara Brown. They aren’t watching Melissa Harris-Perry. They’re watching Bill O’Reilly (who on his show the other night referred to Michael Eric Dyson and Al Sharpton as a lynch mob). So let’s listen to the voices and the stories and then spread that news. Because this is important for us all to get right.