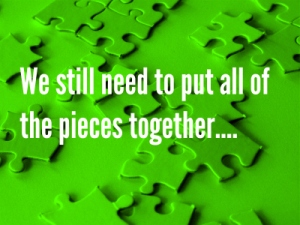 I wrote a post back in March on what I see as the fractured nature of mental health advocacy efforts and how I think it weakens collective efforts to craft a unifying public message about mental health. Given that May is Mental Health Awareness Month (on that it seems everyone can agree) I’ve been seeing a lot of activity from the organizations and groups that I follow on social media. You will find a lot of good efforts going into anti-stigma campaigns, and I am firmly of the belief that the stigma of mental illness, or mental health issues (or whatever politically correct term we’re using (see- even that’s fractured!)) is one of the most significant barriers to treatment and care. There have been some good policy reforms to broaden access to care, from the Mental Health and Addiction Equity Act to the Patient Protection and Affordable Care Act (or Obamacare). There are still policy improvements that can be made, and funding for mental health resources continues to be an issue on the local, state and federal levels. But the fact is there are many good resources out there for people that are underutilized, and I believe it’s due to stigma.

What do I mean by stigma? It’s not always mean-spirited or intentional, it often takes the form of ignorance or misunderstanding. Take, for example, the idea of taking time off of work if you are diagnosed with cancer. In most places there are options for an employee to take job-protected leave and most employers are very understanding and accommodating if they have an employee in this situation. Cancer is a health concern that most people understand requires serious attention and requires substantial treatment. Now imagine taking time off of work for depression. How would you ask your boss? How would it be received by co-workers? I think for many people there’s a worry that many people wouldn’t understand and a few may even be hostile to the idea. You know how it goes: “Get over it.” “Have you tried not being depressed?” “You don’t have anything to be depressed about!” Even the most well-meaning people may have trouble understanding, and may try to empathize with something like “Well, we all have bad days.” For those of us with depression (or anxiety issues, or who may be bipolar, etc.) we know the difference between a bad day or a bad mood and depression.

There are also stereotypes of depression in the media that may contribute to and fuel those misunderstandings. What’s one of the most common stereotypes of depression? Picture the “goth kids” from South Park. There’s this idea that people who are depressed dress in black and obsess over death. Since there are people who associate a certain stereotype with a mental health issue if you don’t conform to their preconceived idea it can be difficult for them to reconcile what they know of you with whatever image is in their head. Hell, people with depression may even hold those same views about what depression is and not pursue treatment because they don’t conform with their own expectations.

Yet there remains a lack of a coherent campaign for reducing stigma. Last night on Twitter I encountered several hashtag campaigns- including:

Anyway, you get the idea. All well-meaning. All trying to do the same thing. But no cohesion, no coordination, and so the message becomes fragmented. The various advocacy groups are preaching to their own choirs but the message isn’t spreading far beyond each niche audience. In one exchange I had last night the point was made that this allows each group to bring the message to new people. Assuming this is true, it only exposes the new people to the specific message of the group promoting that message. A broad campaign across advocacy groups with a unified message amplifies the reach of the cause. A strong unified message can create the kind of national (or international) awareness that spurs change. For example, the national campaign to #BantheBox has spurred action in communities across the country to eliminate the portion of employment applications that asks about criminal convictions. Look at this list of organizations behind the movement that came together with one unified message. Imagine if all of the mental health advocacy groups behind the hashtags above united behind one message. How much more powerful would that message be?

I did learn last night that many of the groups are taking some steps in the right direction, united behind the color lime-green for advocacy (think of the various ribbon campaigns) and it’s something. And I don’t want to pretend like it’s easy- getting all of the various groups together is not a simple thing- especially since many of them are already invested in their own campaign. But it’d be so much better if our lime-green messaging was consistent.