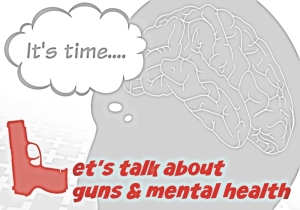 This post is inspired by a comment from my friend Jeff in response to yesterday’s post and was on the topic of whether people with a mental health issue should be allowed to purchase guns. He wrote:

If you had this conversation with someone who knew about your situation and were comfortable speaking about it with them, would you expect the conversation to include whether or not you should be allowed to buy a gun? Would that line of questioning be any less appropriate than anything else?

I wrote  back and told him that I think it’s a fair question and a reasonable line of inquiry. First I encourage everyone to watch this video on guns and suicide before reading my response, because the information it presents is key to my point (after the jump):

I think you’ll agree that it’s actually a more significant problem than most people realize. Based on the data and my own experiences with suicide ideation I don’t think it would be a good idea for me to own a gun- not because I’d be a risk to others, but that it would pose a significant risk to my own life. I correspond with a number of other suicide attempt survivors through this blog and not a single one that I can think of attempted using a gun (because as the video says, the fatality rate of using a gun is so incredibly high). So if we’re going to talk about keeping guns out of the hands of the mentally ill I’d like that conversation to be based on the idea that we’re protecting them as an at risk community rather than protecting society from them, which, with a few tragic exceptions, is a deeply flawed view of the problem. In my view mandatory waiting periods are one of the best ways we can keep guns out of the hands of people who would use them to harm themselves. Given how impulsive suicide attempts are that alone could potentially save hundreds of lives, and, for responsible gun owners a slight inconvenience is an incredibly small price to pay.

You must hear it in conversations or on the news everyday- we must keep guns out of the hands of the mentally ill. How does that make you feel if you have a mental health issue? Forgetting for a moment the politics of implementation, do you think it’s a good idea to have background checks that may flag you as someone with a mental health condition? Would you ever consider owning a gun (do you already own a gun?) These are the conversations that our leaders our having and we shouldn’t be afraid to weigh in and offer our perspectives, so I’m asking my fellow bloggers to comment here or reblog this post and share your own thoughts on the subject. Am I missing an important piece of the conversation?