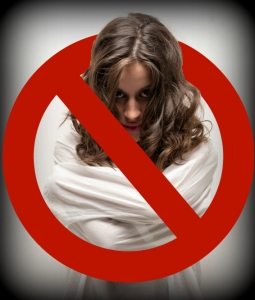 Last year, Susan Estes took her two young children to a Halloween theme park in Kansas City, Mo., owned by Cedar Fair Entertainment. One of the attractions they visited, called “Asylum Island,” was described as a place “where the inmates have taken control of Lakeside Mental Hospital and there’s no cure in sight.”

“There’s no way to really be prepared for what you see when you get there,” Estes said, who described a twisting maze that took visitors past a shock-treatment machine, a character who’d had a lobotomy, and a person strapped to a bed pleading to be let out.

Look, as someone who has spent time in the psychiatric ward of a hospital I can tell you I’m more than a little troubled by the portrayal of mental illness in these venues. First of all, the idea of exploiting illness for thrills is something I have a hard time with. Imagine a haunted house where patrons encountered actors portraying themselves as having HIV and the attraction was “Escape from the AIDS Ward.” Do you think people would be offended?  Yet many people have no problem paying to see people portray the worst stereotypes of what mental illness is.

The second reason it bothers me is that I think it strengthens the notion among the general public that this is what mental illness looks like. Straitjackets, restraints, padded walls, etc. I know it’s not an accurate reflection of my experiences and it isn’t the experience of almost anyone else I know with a mental health concern. Mental health patients aren’t a danger to society as they’re portrayed in these haunted houses. The reality is that we’re at risk to be a danger to ourselves. That’s what’s really scary about mental illness.

90% of people who commit suicide have a mental health issue. What’s worse is that their condition is often untreated. Why? Maybe because they’re afraid to seek help because their idea of what a mental health care facility is like has been shaped by a culture that embraces attractions like this:

The attraction at Carowinds, an amusement park run by Cedar Fair Entertainment on the border of North and South Carolina, was described this way: “You would be crazy to tour this twisted asylum. Lost and tortured souls are all that remain, but you’ll see plenty that will make you question your sanity. … The 7th Ward was home to the Carolina’s most chronically insane. From murderers to crazed psychopaths, many of the poor souls trapped behind the Gothic walls would spend their entire lives there. As you walk these halls today, be sure to stay with your group. This is one place you don’t want to be committed.”

If you live in a culture that promotes this depiction, why would you ever want to come forward and seek help?

Mental illness is treatable. People with mental illness can lead happy and productive lives when they receive care and medical attention. Mental health facilities and care have changed a lot over the last fifty years. There are still hurdles to overcome and room from improvement, but it’s well past time to move beyond these stereotypes.