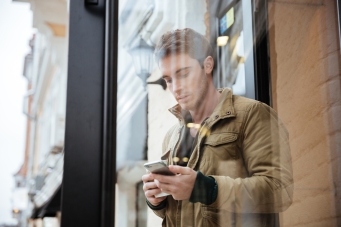 Did you see this article in the New York Times on how our near constant gazing at our phones is impacting our moods (and our manners)?

I am as guilty of this as anyone, but the other day I conducted an experiment- I was in line at Chipotle and it was pretty busy, with fifteen or so people in line ahead of me. Rather than pulling out my phone to pass the time (as many others were doing and is my normal go-to move), I tried to just observe. I noticed a group of three students from a nearby college, presumably friends and there together, all looking at their phones and not speaking to one another. I saw a couple in line behind me, her on the phone with someone, him scrolling through his. I saw how hard the kids behind the counter were working, how they had the whole process of assembling orders down like clockwork. Someone would yell “rice!” and someone would have a replacement tray ready. They were efficient, communicating with one another, relying on the person at the next station to be as effective as they were to keep this whole operation running smoothly. It was great to just see them in action. When most people would order they avoided eye contact, holding their gaze down at the food in front of them. I made an effort to look at the people preparing my meal and say “thanks so much” or “that’s great.” And I mean made an effort- it was hard for me to not just look down and mumble my order! Finally when I paid I told the cashier what a great job their team was doing. It was just a moment, but when he smiled back and said thanks I saw genuine appreciation.

One reason is that this has been on my mind since my friend Dan and I talked about it last week, so I think I was sort of primed to have a moment like this. Now I know this seems like a lot of back-patting I’m doing and I know I probably come off as just a bit self-righteous when again, I’m as bad as anyone most of the time.  I’m trying to become better, and finding I rather enjoy observing the world happening around me.

(And if you’re reading this on a mobile device, this is the end of the post, so put the device down and take a look around).